A London man has found out the hard way that ‘Shit The Bed’ hot sauce does exactly what it says on the tin.

Christopher Hunt of Honour Oak was rudely awakened in the early hours of this morning by his distraught wife and children covered head to toe in last night’s dinner.

“We’d been sent a bottle of Bunster’s ‘Shit The Bed’ hot sauce by a friend in Australia and decided to give it a go with our weekly Fish Fingers and Alphabeti Spaghetti” Christopher said.

“It was only when I woke up to the wife and kids crying and screaming that I realised just how effective the sauce was.”

Christopher’s dry cleaning bill is estimated to have come to around £5000 and the former family home has been declared uninhabitable by the Environmental Health Agency until further notice. 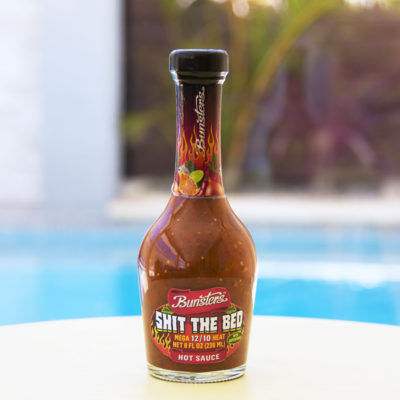 Beware of the offending substance as it may strike you without warning!