And we curate the UK’s most incredible hot chilli sauces, rubs and spices, spicy foods and beer snacks, bbq products, craft beers and ciders. We can’t get enough of it.

Since launching in April 2015 we’ve worked closely with the most passionate and skilled spicy food producers in the UK. Our mission is to take the everyday spicy food fans of this world and turn them into absolute raving fiery foods addicts.

We’ve been curating hot chilli sauces and all sorts of other spicy foods since 2015. You could say we have the greatest job in the world. Find out more about our journey below! 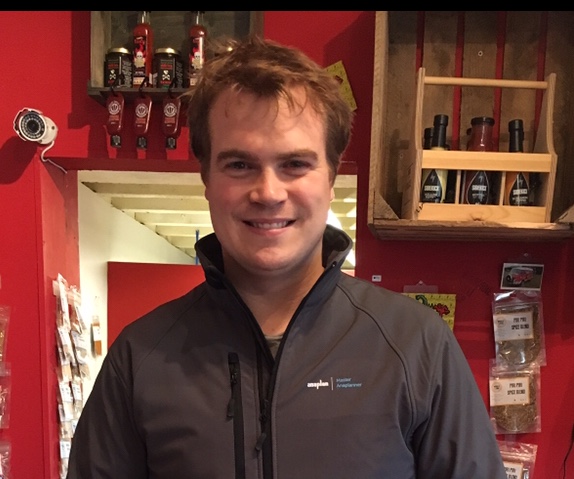 A former world touring punk rock violinist with a crippling addiction to spicy food called Dave launched Lick My Dip as the nation’s first ever hot sauce subscription via a successful Kickstarter campaign. Immediately Lick My Dip began to broaden the nation’s spice horizons by making the thrill of discovering new chilli products just that much more accessible.

Sauce-obsessed (and now our Chief Chilli Head) James, launched Sidekick Sauce at the Festival of Heat in Shoreditch, London where founders Dave and James met. The Screaming Pepper sauce by Sidekick was quickly featured in the October 2015 box to much acclaim from the members.

The Sidekick Sauce team go on to open Wimborne Chilli Shop (and future Flaming Licks HQ) in Dorset. Stocking 100’s of the UK’s most amazing spicy products, it begins to fuel the flames across the South Coast.

A year later Lick My Dip and Sidekick Sauce decide they’re better together and decide to join forces. They forge on with their missions burning up Britain.

Way past the honeymoon period and as a result of months of beautiful, yet slightly sadistic mating of hot stuff spawns the fiery foods club, Flaming Licks. A burning, overwhelming desire lives on to showcase the greatest spicy artisan produce we can find.

Here we stand, immensely proud to be shipping the finest British small batch spicy products to the most committed spicy food addicts all over the world. From the simple to the unique, from the subtle to the in-your-face fire, we strive to blow the minds and mouths of all spicy food fans on the planet!

We move next door into an old flour mill in Wimborne, Dorset. As well as being our new HQ, we open a new food & drink store called Farehouse Trading Co. stocking chilli products, spices, craft beers, cheeses and more.

We announce the closure of our hot sauce subscription boxes and lanch our new fiery foods marketplace: the greatest collection of the UK’s finest chilli producers and breweries known to mankind.

When the withdrawal symptoms get too much 😜 H

🔥We’re crowdfunding🔥 Choose from a range

🔥Last chance🔥 to register interest as an ear

Our crowdfunder is live! Help us localise the (spicy) food chain here Dismiss